This is a very prestigious moment in the club’s history as they are now the official top club  in Ulster rugby. Hinch are hoping to kick-off their All-Ireland Division 1A Season next Saturday 28 September at 2.30pm, in style.

This match sees Cork Constitution RFC make the long journey North to Ballymacarn Park near Ballynahinch to take on the County Down men who will be led by Club International Stuart Morrow and are under the coaching tutelage of Derek Sufferin and Charlie McAleese. 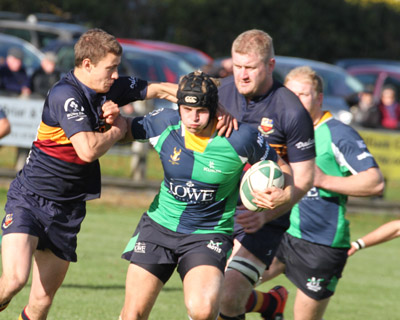 The Ballynahinch side have had an excellent start to the defence of their Ulster Senior League champion’s title, with three convincing wins already under the belt against last years league runners-up City of Derry, Malone and in Wednesday evening’s County Down derby against Banbridge.

The match day will start with the pre-match lunch for over 150 people at 1pm. Guests for the lunch include the Chairman of Down District Council, Councillor Maria McCarthy, local MP Margaret Ritchie and several local MLA’s.

There will also be catering and bar facilities available outside the Clubhouse and a large crowd of spectators are expected to attend on the day Club President Ian Dornan said: ”I am really looking forward to getting our All-Ireland season started as there has been a huge amount of hard work put in by the players, the Coaching Staff and the Club Council in preparation for this Division 1A challenge.”

Ian Dornan added: “We, as the only Ulster Club competing at this level in Northern Ireland, have a great deal of pressure on us to ensure that we best represent ourselves and Ulster club rugby.  With the squad of players and coaches that we have, we are in an excellent position to make sure that we give a good account of ourselves at this prestigious level of rugby.”

“We expect a large crowd of spectators on the day and the gate will be open from 1pm for those already planning to attend, but would love to see more come from the Ballynahinch and wider County Down community.”

Gates open from 1pm for those not attending the pre-match lunch and entry fees are £5 for Club members and £8 for non-members.