<![CDATA[ <p style="text-align: justify;">A state-of-the-art replacement playpark is in the pipeline for the Meadow area of Ardglass.

The Ardglass Resident’s Group which helped secure the finding, was set up in 2012. The group is made up of people who live locally and aims to improve the quality of lives of those living in the Ardglass area. Whilst still a young group, the group have a lot of support in the area and since their formation they have now brought over £140,000 of funding into the village. 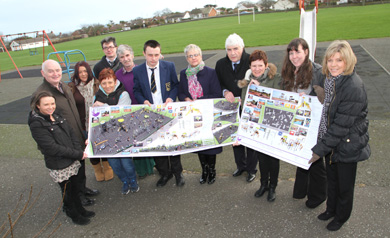 Ardglass is to have it’s Meadow Playpark rejuvenated. Pictured are members of ARG, the CDRCN, DRAP, and the NIHE with Councillors Cllrs Eamonn Mac Con Midhe, and Dermot Curran, and South Down MP Margaret Ritchie.[/caption]

The Committee have accessed funding from the Down Rural Area Partnership, Down District Council and Northern Ireland Housing Executive for the park at the Meadow to be developed in line with modern standards.

Lizzie Walsh, Chairperson of Ardglass Residents Group said ‘We are pleased to announce the appointment of Crawford contracts.  We are delighted with plans for to develop the play park and think it will be a terrific boost for the many families in the area.  We hope to see the work completed by the end of March.

“We have recently completed a village plan which has identified future projects so we hope this is the first of many projects which will benefit  local people.

“This project would not be possible without the funding from Down Rural Area Partnership, Northern Ireland Housing Executive and Down District Council.  Nevertheless the group wish to say a special word of thanks to Patrick Mc Cluskey from Down District Council who lead the procurement process and to County Down Rural Community Network for their support throughout the process.”

Councillor Dermot Curran added: “I am delighted that the group have been awarded the funds for the play area. This package is over £100,000 and will now provide a clean and safe area for the children to play in. It has been a long road getting this finding in place but local residents will soon reap the benefits of it by early summer.”
]]>