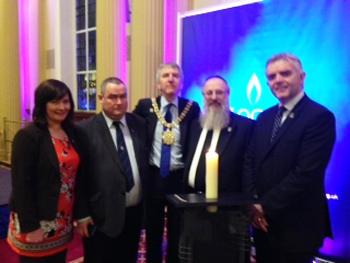 Speaking after the event: “I was very privileged to have represented the Council at the Commemoration Service which was an act of remembrance for victims of Nazi persecution in the concentration camps and many other atrocities since the World War.

“Master of Ceremonies was Paul Clark UTV  and the welcome address was delivered by the Lord Mayor of Belfast Mairtin O ‘Muilleoir. Various representatives made their own special contribution, including the Chief Rabbi Mr David Singer and along with other Churches.

“I found the Holocaust Commemoration very moving and sad and during the course of the Service my thoughts drifted back to Auschwitz, Belsen , Sobibor and other camps where millions were persecuted and lost their lives.

“The Lighting of the Candle and a prayer for the repose of the souls of the departed were fitting tributes and the Choir of Lagan College excelled with inspirational music on the night,” added Cllr Andrews.