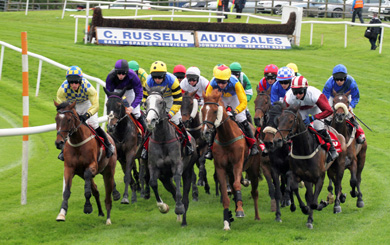 An excellent crowd turned up to support the May race meeting in Downpatrick.[/caption]

The winner with stable rider, William Thompson aboard, was always prominent prior to leading four from home and registering a very easy success for owner , Ronnie Barlett – owner of dual Cheltenham Festival winner, Simonsig. The Ballymena trainer said: ” He loves the faster ground and did that very nicely – He is entered for the Doncaster Sales – We will wait and see what happens.”

Aintree Foxhunters hero, Warne, trained beside the course by Brian Hamilton paraded in advance of the chase named in his honour with Waterloo Chateau supplying Mark Flanagan with his seventh winner and his first chase victory having previously partnered six on the flat and one over hurdles the rider said: ” I took a break for while – I want to thank Gerry [Keane] for giving me the ride.”

Patrolman trained by Shark Hanlon turned out again quickly after finishing second at the Maze on Monday and gained compensation in the handicap hurdle. Jockey Andrew Mc Namara settled his mount mid division prior to challenging the front running Boherna Lady before the final flight as Shanroe Society also challenged on the outside but the winner had plenty in reverse and scored easily.

LINK TO PHOTO ALBUM FOR RACES 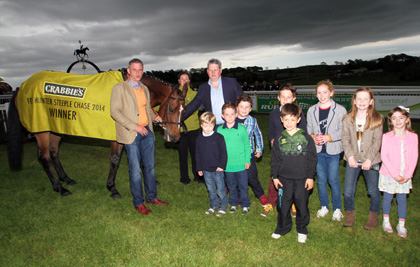 Aintree fox hunter steeplechase winner Warne makes an appearance in the ring at Downpatrick and included is Tim Higgins of thetote.com[/caption]

Hanlon said: ” He was unlucky on Monday – if he had not made the mistake at the last – he would have won but he got in here without the penalty.  I’ll give him a break and aim at the Galway Festival. He likes good ground.”

Top jockey, Mc Namara doubled up on the night when Shantou Flyer was the very easy winner of the Tote Live The Dream Hurdle. The Leading points handler, Colin Bowe said: ” The step up in trip and better ground suited – He was a bit unlucky last time at Cork. I’ll give him a break now.”

Tim Higgins, CEO of Tote Ireland, who was paying only his second visit to the track to present the trophies, said: ” I am was very impressed by the attendance tonight and the volume of betting in the ring and on the Tote. I’m delighted how good the Tote turnover is.  Downpatrick reminds me of the old fashioned meetings – the people, betting and atmosphere.

“Richard Lyttle and his team have done a great job with continuous improvements and innovations. I want to express a big thank you to them and it’s terrific the track is now on board.”  The Tote Ireland handicap needed a photo to separate Royal Chief which had lead from four from home and held the late inside challenge of Jim Bowie trained by James Lambe and partnered by his stepson Liam Mc Kenna which squeezed between horses only to be denied by a nose. A stewards enquiry quickly announced- however there was no alterations to the final placings. 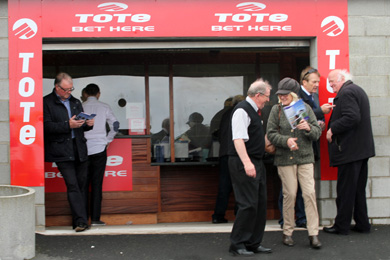 The Tote was well supported on the day with the added introduction of the new digital feedback system making payments and information very quick.[/caption]

The winner was trained by Eoin Doyle and partnered to victory by Micky Butler.   Racing got underway at Downpatrick when odds favourite, Draycott Place with former Irish Champion jump jockey, Paul Townend registered a facile victory for trainer, John Ryan in the opener.  The winner was always prominent and made most of the running in the maiden hurdle.

The runner-up Slim Pickens attempted to lay down a challenge two from home but could never get of terms with the very easy winner.  The winner trainer said: ” He is a high class horse. I will aim him a a good novice hurdle next year.” While Paul Townend added: ” He did it very easy – I just hit him one slap and he took off.”

The concluding bumper produced a surprise when 25/1 chance Solita trained by Paul Nolan and partnered by Bon O’Neill claimed the finale with the trainer also winning the bumper at Cork.  News From Pascal trained at Strangford trained by Stevie Magee – the point to point winner attempted to make all the running before finishing a very creditable third and a similar contest looks a possibility in the coming months.