<![CDATA[THE fishery is in full swing again since the recent bad weather and is now open in the evenings. Due to popular demand boats are now available for bait as well as fly angling and as a special offer are free of charge Monday to Thursday. [caption id="attachment_38062" align="alignleft" width="350"]<a href="http://www.downnews.co.uk/wp-content/uploads/2013/04/carrickmannon.jpg"> 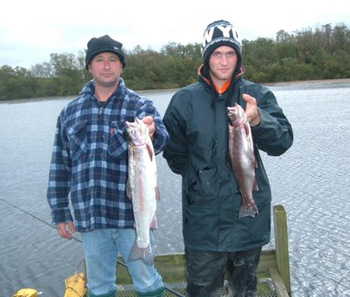 Carrickmannon Fishery provides plenty of sport for local anglers.[/caption] As it has been cold and windy recently, most anglers have chosen the more sheltered ponds and because the water temperature is still quite low the fish are only starting to rise. Most popular flies have been Cat’s Whiskers, Hare’s Ear, Montana and Nymphs. From the lake, Harry Davidson from Ballygowan and Graham Vennery from Comber caught and released nine. Stephen Hamilton from Belfast hooked fifteen and Ian Thompson also from Belfast had nine. On the Fly Pond, Jordan Pyper from Ballynahinch kept two for 3lbs and released six. Gareth McGaughan and Michael Dunphy from Carryduff both released eight. Bobby Maguire had fifteen and Bob Gerard from Newtownards caught two for 4lbs. On bait Thomas Scanlon, Frankie Hurst and Clarke O’Donnell between them caught five for 9lbs. Stewart, Caleb and Olivia Montgomery from Newtownards caught five from the Children’s Pond. On a Family Ticket the McCann family from Belfast caught four for 7lbs. A group from Baillie’s Mills Boy’s Brigade visited the fishery and between them caught seven fish and had a great day.  http://www.carrickmannon.com e-mail:  carrickmannonfishery@btinternet.com CARRICKMANNON FISHERY 130 STATION ROAD SAINTFIELD CO. DOWN BT24 7EL TEL; 02897 510654 Mobile: 07787853903